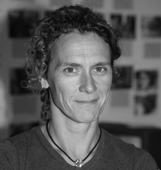 Sally Fryer (ASE) is Senior Editor at Shark Island Productions and a Director of Shark Island Institute. She was a founding Director of the Documentary Australia Foundation, and is Co-Producer of Good Pitch² Australia.

She has 19 years experience as a freelance documentary film editor both in London and Sydney, and has cut over 100 documentaries during her career. She worked principally for the BBC and Channel 4 in the UK and for the ABC and SBS since arriving in Australia in 1998.

In 2011 she gained accreditation from the Australian Screen Editor’s Guild, and in 2012 was awarded an ‘Ellie’ by the Guild for Best Editing in a Documentary Feature for the film Paul Kelly – Stories of Me which charts the remarkable life of one of Australia’s most gifted and beloved singer-songwriters. Paul Kelly – Stories of Me also won the Film Critics Circle of Australia Award for Best Documentary in 2012. In 2008 she won the AFI Award for Best Editing in a Documentary for The Oasis – an observational feature documentary shot over two years about a group of severely disadvantaged kids who live on the streets of inner Sydney. Working with Shark Island Productions since 2005 she was consulting editor for Stories from the Inside, editor of two short dramas, Polly and Me (a harrowing tale of child abuse and neglect, seen through the eyes of an 8 year old girl),and Wall Boy, In the Company of Actors – a feature documentary starring Cate Blanchett and Hugo Weaving, in which a company of actors reveals the magic and struggle of creating world class theatre, Alone Across Australia which was voted ‘one of the top 20 adventure films of all time’ and has now won over 25 international awards, and Woodstock for Capitalists which won several awards including a Cine Golden Eagle Award.

Sally was a finalist for the Dendy Awards Best Documentary Category 2005 with Political Football and winner of the Australian Film Critics Award for Best Documentary in 2003 with The Original Mermaid. Her work has twice been nominated for an Emmy award and many many years ago Watergate – a compelling 5 part series – won an International Emmy for Best Documentary series.

She is the very proud mother of 2 beautiful boys, Louie and Thommo, and a dog called Hiccup.