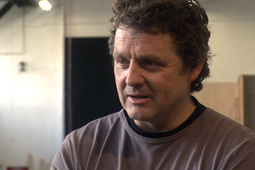 James McKay has been head of the construction department of the Production Workshops at Sydney Theatre Company for nearly ten years. James works with production staff and designers to cost, construct and install all sets for all productions across all the venues STC uses. As well as considering the build of each set James works around the varying materials required to fulfil the designers visions, sets to be flooded, be rained on, have coverings of sand, grass, blood and perspex. Recently James and his team constructed a raked, forced perspective hospital for Ying Tong, and a to scale house, revolving on the Drama Theatre stage for The Season at Sarsaparilla. Some of the more significant sets James has constructed were for The Lost Echo, Copenhagen, Hedda Gabler, Woman In Mind, The Bourgeois Gentleman, The White Devil, The Lady in the Van and The Miser.

Prior to joining Sydney Theatre Company James worked as a Construction Manager mostly in film and television, credits include Big Sky, Cody, Hart to Hart and the films Doom Runners, Thank God He Met Lizzy and Dating The Enemy.