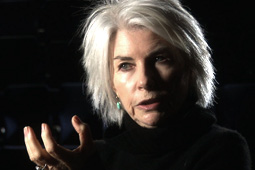 In June of 1999 Robyn joined Sydney Theatre Company as Artistic Director. Her involvement with the Company stretches back to performing in the company’s production of A Cheery Soul in its initial season in 1979, reprising the role in 2001.

In her time as Artistic Director, Robyn has programmed eight subscription seasons and worked towards producing theatre of a high standard that entertains and challenges the audience. She has a strong commitment to the development of the art form of theatre and to excellence in all the company’s endeavours. Some of Robyn’s extensive directing credits for Sydney Theatre Company include: Boy Gets Girl (2005), Summer Rain (2005), Scenes from a Separation (2004), Hedda Gabler (2004) and tour to Brooklyn Academy of Music (2006), Harbour (2004), The Real Thing (2003), A Doll’s House (2002) and Hanging Man (2002).

In 2006 she established The STC Actors Company and directed its debut production of Brecht’s Mother Courage and Her Children.

Other directing credits include After the Ball, Honour, Summer Rain and A Month in the Country (QTC); Kid Stakes, Scenes from a Separation, Summer of the Seventeenth Doll and On Top of the World (MTC); The Removalists (State Theatre of South Australia) and The Marriage of Figaro (State Opera of South Australia).

In 2005 Robyn appeared as Madame Ranevskaya in The Cherry Orchard. She will appear on stage again 2007 in Don DeLillo’s new play, Love-Lies-Bleeding.

Throughout Robyn’s acting career, she has performed in numerous productions including: The Marriage of Figaro (QTC), Long Day’s Journey into Night (QTC and Bell Shakespeare) and Amy’s View (QTC/MTC). She has also appeared with Sydney Theatre Company in Master Class (co-production with MTC), The Ham Funeral, Big and Little, Emerald City (which toured to the West End), Tom and Viv, The Seagull, The Perfectionist, Macbeth, Cyrano de Bergerac and Life After George.